March 31, 2019
This is the prequel(and sequel, but the sequel part just consists of several events.) of Pokemon Mega Power and the sequel of Pokemon Resolute. In this game, you play as Chronya, the young hero of Cyenn Region.
Story:
12 years ago, Altena, the general of Valo Empire had to leave her country with her daughter Chronya. She didn't tell Chronya why they had to leave their hometown. The only thing Chronya knew was that she had a father who lived in Cyenn Region, and her mother decided to ask for his father's help. However, they were attacked by Dark Workers, who were employed by the Valo Emperor. The emperor wanted to get rid of Altena forever. Altena fell into Dark Worker's trap, Chronya had no choice, she had to jump into the ocean. She was saved by a young agent, this agent was called Gavin. To defend Chronya, Gavin gave Chronya his Pokemon. This is the beginning of Chronya's journey...
Features:
New region -- Cyenn Region, Western Tyron Region, Sevii Island and Lande Region.
Pokemon from generation 4 to generation 8.
Real Mega Evolution -- Except for Chronya's first Pokemon, it's special.
No Gyms -- Battle Arenas take the place of the Gyms.
No Pokemon League in Cyenn Region -- The tournament takes the place of the Cyenn League.
You can decide on when to challenge the Cyenn Tournament by yourself.
Skills take the place of HMs, try to learn more useful skills.
Half open world(After the Shedir Town event).
You can decide on when to begin with the main storyline by yourself.
Black/White Repel System.
In-game guide system(think), which allows Chronya to talk to herself so that you can find out where to go next. 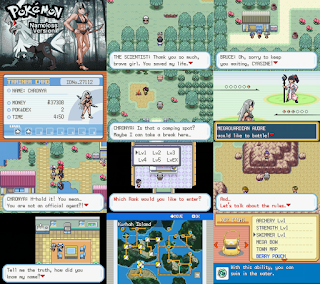 Credits:
jiangzhengwenjzw for helping with taking out many glitches and adding many useful stuff for Beta 4.
LU-HO, HackMew, karatekid552, Kurapika, FBI, esperance, Darthatron, jiangzhengwenjzw.
For the tools and tutorials, 邪亚斯 for testing the new beta 4.

Touched
For the mega evolution system

Progress:
The whole game is complete.

This is the complete version of this hack, but there will be updates for fixing the glitches.
New - Download link for fixed Beta 4.11(Patch this on Pokemon Fire Red V1.0):
https://www.mediafire.com/file/m2pd7zhvre4jnjt/Pokemon+Nameless+Complete+Beta4.11+Fixed.rar/file
Hopefully this one can be a true last update.
This update contains the following changes:
Farigiraf's base stats and movepool were changed according to the leaked data of Scarlet/Violet.
New TMs, now this game have 58 TMs, you can get the new ones from some sidequests added in the new version or directly get them from someone.
The new TMs can be found in Etamin City, Marfik City, Crystal Village, Skylight Village, Caph Island and Hibiscus Path.
An egg hatcher was added, which can be accessed after finishing a sidequest in Brightlight City, this sidequest will only be available after you get the tools for making Master Balls.
Pandroa became a new rival of Western Tyron/Lande, she has three new battls and several new events related to her. She can still be battled in the old save files, but the order of when you start the events may make the story a bit inconsistent. It's recommended to meet her in Rose Town-Skylight Tunnel-Hibiscus Path-Ceratoides Town, her event in Skylight Village is a sidequest, so that won't affect the story too much.
Koraidon was added, it can only be unlocked in Miscanthus Town after a sidequest.
Screenshots: 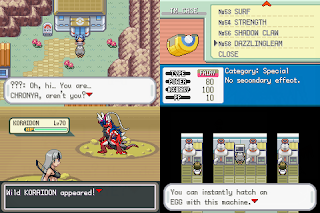 Thank Olivia R. for writing the very detailed walkthrough and Battle Arenas Guide, they would be very helpful for many players:
Detailed walkthrough:
https://docs.google.com/document/d/e/2PACX-1vSdsGB_iq2CPKLvzLu8fGwPLrW6KW4a3LGMfFTKjJlGXExklOiK5MF6wpMpWeNGC-oAm7-UZ3-HM4sX/pub
Battle Arenas Guide:
https://docs.google.com/document/d/e/2PACX-1vQt6P-4Ddn8DKV8d6B5HtG-lU86Nq0_utNiZnjKe6kAp6G3yjoKLFSi-uUvLe6LxzxVJKLB3AuxVFd2/pub
New - Download link for fixed Beta 4.10(Patch this on Pokemon Fire Red V1.0):
https://www.mediafire.com/file/szvbfyg9i899egc/Pokemon+Nameless+Complete+Beta4.10+Fixed.rar/file
This update mainly upgrades the craft system. More items can be crafted now, and you can get a toolkit for making Poke Balls in the depth of Alya Cave, with this toolkit, you will be able to make Poke Balls.
Girafarig, Farigiraf, Hisuian Zorua, Zoroark, Decidueye are added.
Many Pokemon sprites are redone.
Bugfix, mainly for fixing Magnezone's wrong sprites and base stats.
Screenshots: 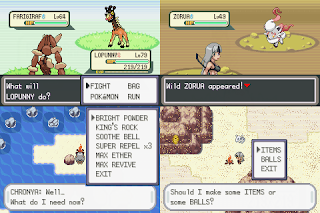 Beta 4.09 fixed some movement errors and other minor glitches.
For those people who lost their old save file and wish to play the mega power episode only, they can use this save file, in which the main storyline is finished up to the first time you can start the mega power episode:
https://www.mediafire.com/file/6n60m34y4wrzrnc/Pokemon+Nameless+Complete+Beta4.09+Fixed.sav/file
Beta 4.08 fixed the glitch which may mess up the TM Case. item bag or PC. The puzzle of the Garchomp mega guardian was fixed as well.
Beta 4.07 fixed the glitch which could make Salamence stay its mega evolution after the battle, and the modified Exp. Share was removed once again, because it breaks the balance of the game too much. And it mistakenly changed the gaining exp points thing before you can get it, so it must be taken out for good.
Edit: A glitch related to restarting the game was fixed, in the older versions, if you have finished the childhood part of story and restart the game, the sprites of the player will be messed up, but now it should fix itself once Chronya leaves her room at the beginning.
Beta 4.06 fixed some minor glitches including Eliza appearing in Battle Department too early, and I added a script on Mt. Antares to make sure you can always learn Strength Lv3 if you still haven't learned it.
And there are many changes:
The Lande Badges will no longer be put in your key item bag, they'll be put in a Badge Case instead, but of course, this change only works for those who still haven't been to Lande, and those who have reached Lande cannot get the Badge Case, but don't worry, they are still there even if you can't see them. This was done to make sure the Key Item bag won't full and make some key items unobtainable.
The Exp. Share was modified, now it works the same way as the X/Y exp. share, credits to Samu from Whack a hack foro for the asm routine. But the way how you craft an Exp. Share was changed, now you need to make two Machine Parts(If you had the old Exp. Shares, they would become machine parts automatically)to assemble one complete Exp. Share.
Beta 4.05 fixed some wrong text and the bug which makes Latiosite unobtainable. Latiosite should be found in the underwater area of Eucheuma Path now, and once you've found it, you'll be able to buy it from someone on Eucheuma Path.Beta 4.04 fixed some glitches mentioned in Olivia R.'s walkthrough but overlooked by me.Beta 4.03 fixed some of the minor glitches which were mentioned by Olivia R. in the detailed walkthrough she wrote, which includes the text errors which mistakenly referred the Valo Emperor as the Valo King.
Beta 4.02 was updated for fixing some minor glitches like several trainers have wrong pokemon moveset.Beta 4.01 was updated for fixing a potential glitch which could make it impossible to access mega power episode after you skipped it.And, for those who already started the special episode succesfully in the previous Beta 4, please don't update your game to the newest version until you finished the mega power episode. Which would cause some other glitches.
The old save file still works with the new beta, but if you must not save in the outdoor area of Gracilipes City, and if you wish to play the extra episode after the rival's event in the prison is over, then talk to rival in Gracilipes City to start the Mega Power episode.
This new beta fixed many minor glitches and added the special episode called Mega Power Episode, which contains the major spolier of the main storyline of Pokemon Mega Power, so you can skip this episode after you talked to your rival after you got all 8 Badges of Lande, and you can start this episode again whenever you talk to your rival in Gracilipes City. So, if you don't want to see the spolier from mega power, then you can simply skip it and come back later whenever you want.
Here're some screenshots: 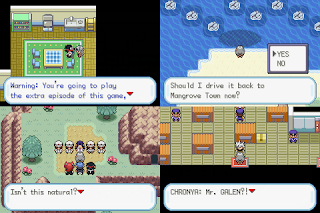 And many people mentioned a glitch which may make TMs and Berries disappear, which is the glitch I've always wanted to fix but always fail to replicate. If anyone who are able to replicate this glitch and find a way to make sure this glitch can be triggered whenever it's needed, then please tell me so that I can find out how it happened, but do make sure to use mgba and turn off the VBA compatibility and keep the save file before the glitch occurs. I would be very thankful if anyone can do this.
And...
A brief walkthrough for this:
https://www.mediafire.com/file/i4csk0p8hbpz1sg/Brief_walkthrough_for_Pokemon_nameless.txt/file
This is here for those people who can't find out how to learn all skills:
http://www.mediafire.com/file/6ensso0otvb7vc0/Pokemon_Nameless_Skills.txt/file
For those who need the list of the Pokemon loacations and mega stone locations, please read this list by jericho922:
https://www.mediafire.com/file/prdzugs636qz2vz/Nameless_Pokemon_Locations_by_jericho922.txt/file

Popular posts from this blog

"The victory is yours, it's time to save the whole Tyron Region." Introduction: Iron/Pure is a boy/girl who wants to become the greatest trainer of Tyron Region. One day, a Pokemon shows up in his/her dream. It tells Iron/Pure that it chose him/her. After he/she wakes up, he/she gets his/her first Pokemon and meets his/her new neighbor. His/her neighbor is an unfriendly boy called Uranium. He doesn't train his own Pokemon. Instead, he uses others' Pokemon. When Iron/Pure wants to leave his/her hometown, he/she sees that professor Ivan is under attack. The attackers are Team Mirage members. Team Mirage is an active organization of Tyron Region. No one knows what they are going to do. Iron/Pure will travel the whole region to fight against Team Mirage. And he/she will find out what Team Mirage is planning to do soon... Features: New region,new gyms(Of course) New TYRON-styled Trick House Underground Black Market in Marble City Some 4th gen and 5th gen Pokem
Read more

"The power of mega evolution... Will it change the future?" Introduction: Neil/Tyra, a gifted scientist of Ivara Region, is trying to create a powerful Pokemon called Mewtwo. Neil/Tyra did it. However, this is not enough for Neil/Tyra. Because he/she want to make Mewtwo stronger. He/she want to turn it into a Pokemon which can mega evolve without ordinary mega stones, but unluckily, he/she has no money to keep it up. When he/she thinks that he/she has to give it up, a man called Kasper showed up. This man is a businessman, what's more, he is the leader of Team Delta, a mysterious organization of Ivara Region. He said that he can help Neil/Tyra to finish his/her experiment. Neil/Tyra has no choice, he/she joins Team Delta. However, he/she is still wondering, why did Kasper help him/her? Should he/she trust this man? Features: New regions(Ivara, Lande, Sevii Islands), new gyms(Of course) All mega evolutions Some 4th gen, 5th gen, 6th gen and 7th gen Pokemon Some new
Read more